The Local Provisions Schedule (“LPS”) completed exhibition under the Land Use Planning and Approvals Act 1993 (“the Act”) on 17 February 2020.  54 representations were received during the two-month exhibition period, with another four representations received after the period closed.

The representations were assessed against the requirements of the Act and workshopped with the Council to determine how to respond to them.

The Section 35 Report is available from the Council website from 20 August, along with the agenda report (click here). . That report will be considered at its meeting on 25 August.

Many representations were not allowed to be considered under the requirements of section 35F of the act (available here).  These were seeking changes to the State Planning Provisions or to Transitional Provisions.

Changes to the State Planning Provisions are prohibited under the Act.  Where changes are required, Council must lodge a notice with the Tasmanian Planning Commission under section 35G of the Act.  The report provided a recommendation that supports changes to some provisions, including exemptions, operation of the scenic management code, how the Priority Vegetation under the Natural Assets Code is prepared and works, how water quality issues are managed under the State Policy on Water Quality Management and management of lighting impacts on natural landscapes.

Transitional provisions are subject to a Notice under the Act allows them to transfer from the Interim Planning Scheme to the Local Provisions Schedule.  Changes to these are limited to translation issues going from one document to the other.

Where to from here?

From here, the report is submitted to the Tasmanian Planning Commission to continue their assessment of the LPS.

There is a four lane, all tide public boat ramp with large vehicle and trailer parking facilities.

Council has completed Stages 1 to 4 of the marina expansion to cater for the high demand for marina berths.

Expansion development to the TWMP commenced in 2012.

The TWMP has 24 hour CCTV monitoring for security.

The Triabunna Wharf and Marina consists of the following:

The development of the TWMP has cemented Triabunna’s future as the gateway to Maria Island National Park and a boating mecca for East Coast Tasmania. 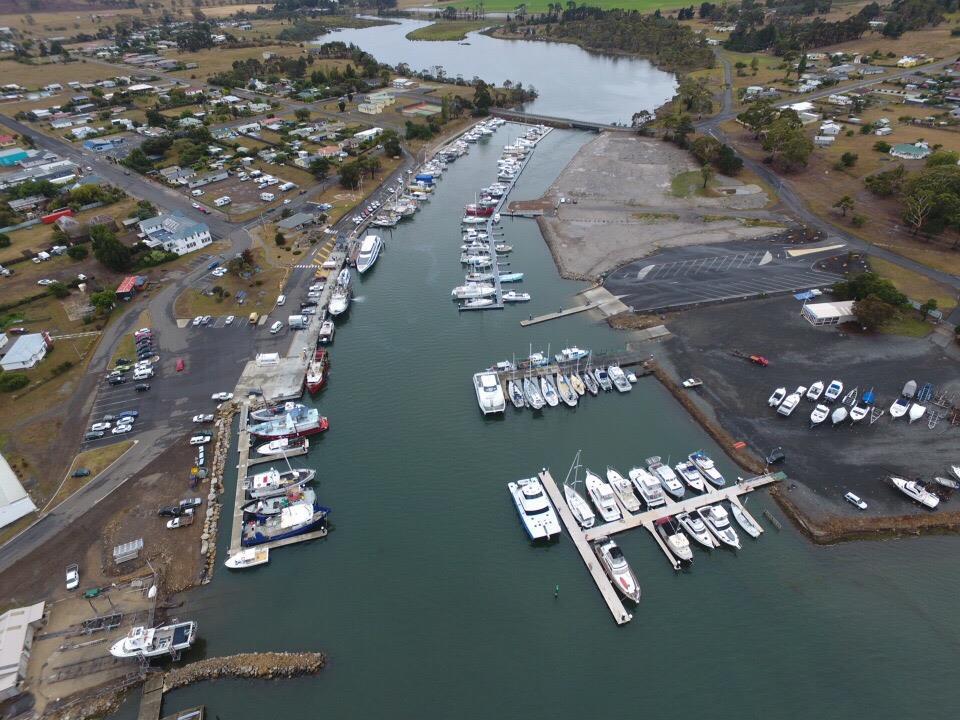 Due to the economic and social success of the Triabunna Wharf and Marina Precinct, and the ongoing demand for additional commercial and marina berths as well as the long-term needs of the Maria Island ferry, a long-term master plan has been prepared.  The Spring Bay Harbour Expansion Master Plan was developed through 2018 in consultation with key users and stakeholders.

The development of the Spring Bay Harbour Expansion Master Plan coincided with Federal Government infrastructure grant funding programs that relate strongly with the objectives and social and economic benefits that the Master Plan will bring.  Accordingly grant submissions were made with multiple letters of support from local organisations and potential users however the outcome is not yet known.

Solis covers 272 hectares of premium waterfront land, only a 45-minute drive from Hobart airport. It offers the perfect base to explore the National Parks and World Heritage Areas found on the east coast of Tasmania.

Solis can be broken down into three specific components, which will be constructed and developed simultaneously. These include: 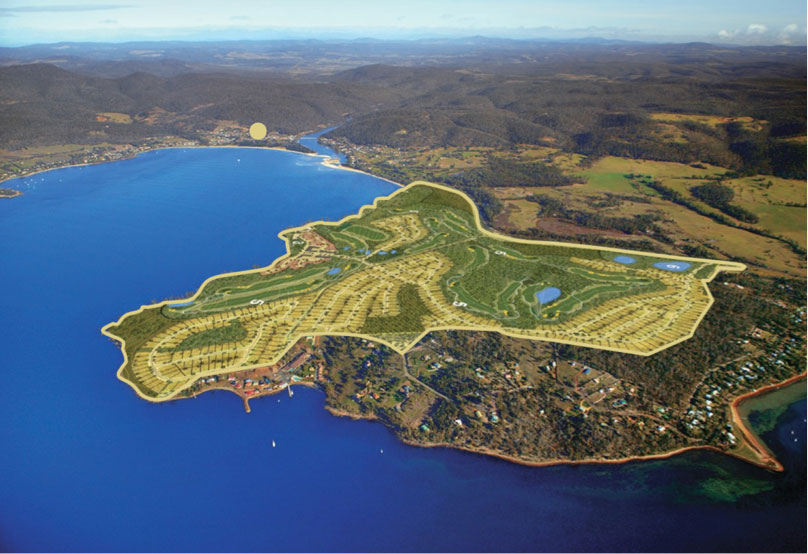 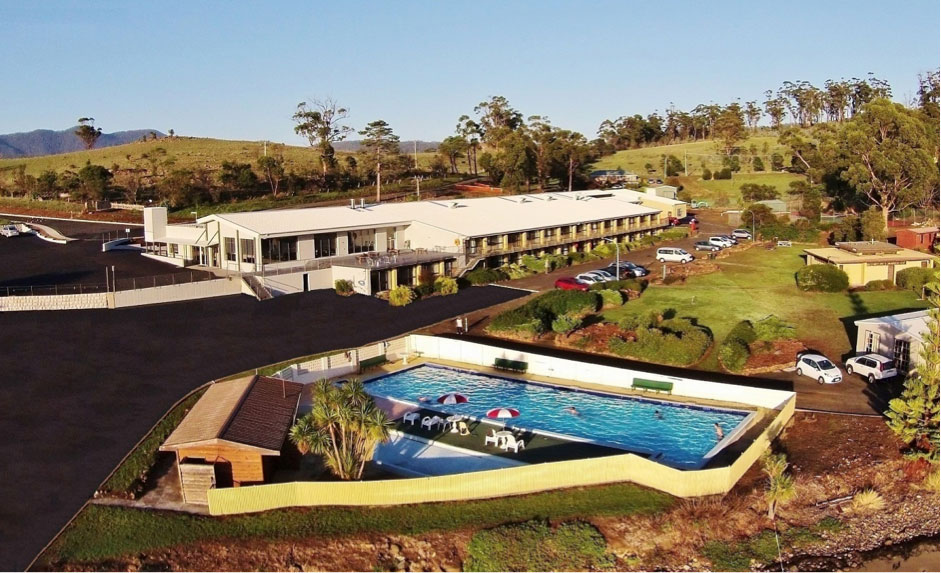 In 2005 Solis begun a process that will hopefully lead to land at Louisville Point, Tasmania evolving into a practical example of an ecologically sustainable community with emphasis on recreational and residential elements. Solis is an integrated development set on 272 hectares

The Solis development has the capacity to bring significant, long-term economic gains to the lower south-east region of Tasmania, as evaluated in an independent business case evaluation.

From 2010, the Council has been an active participant in the project working in collaboration with the developer, Bayport to resolve impediments to the project proceeding.  Council engaged in the project in order to diversify the local economy in a way that focused on the sustainable development of the regions natural assets.

Between 2010 and 2014 the Council received and supported various business case propositions that entailed joint venture style partnerships and direct investment in the golf course.  Over this period, the Council had approved borrowings of up to $5 million and had considered preliminary business cases to develop the golf course using the funds with a the aim of divesting the golf course by sale or lease to a third party.

Sewerage has also been a significant infrastructure issue for the project.  The original vision entailed on large wastewater treatment plant located on the site to sewer the entire development and provide irrigation water for the golf course.  The quality of this irrigation water was identified as a concern by potential joint venture partners.  Thus, in 2010 Solis and Southern Water signed a Memorandum of Understanding to manage wastewater by connection to Southern Water assets.

In March 2014, the State Government then committed $3 million in funding in the 2014-2015 budget under the Regional Revival Fund to Solis.

During 2016 the need for water for the golf course matched with the need for water for Tassal Group Ltd and the Council resolved to proceed with the Prosser Plains Raw Water Scheme (PPRWS), with its cost underwritten by Tassal Group Ltd less a $2.37 million Federal grant under the Regional Jobs and Investment Package.  The PPRWS will commence construction during March 2019.

In 2018, Council in consultation with TasWater, State Growth and the developer commissioned JMG Engineers and Planners to undertake preliminary design and cost trunk sewer infrastructure for Solis and existing development on the Louisville Peninsula utilising the previous State grant funding.  Extensive discussions have taken place involving Council, Solis, the Eastcoaster and TasWater to progress this sewerage scheme utilising the grant funding.  There is the potential that the State grant may be transferred to TasWater given the impending ownership structure of TasWater.

The Developer of Solis has being actively engaging council over the last 18 – 24 months. It goal is to proceed with works on some of the approved elements of Solis during the second half of 2019.

The Council has approved borrowings from State Treasury of $6.0 million.  Of this, no monies have been committed to fund Solis.  There has been significant in-kind assistance offered since 2010 through substantial staff time.

There has been an allocation of Council funds through an approved RTR (Roads 2 Recovery) grant to redo Louisville road in conjunction with new water mains, sewerage mains and raw water mains in this approved budget with work to commence shortly.

Solis have continually sought and are committed to find ways in which to develop the golf course as a viable, standalone business proposition.   Council staff recently met with a professional golf course development consulting firm engaged by the developer for this purpose.

Any expenditure of funding above and beyond the grant that was awarded by the State government to Council for public infrastructure must be approved by the Council prior to occurring.  There is no current expectation of this being necessary.

The Triangle is currently under-utilised public space in the centre of the Bicheno township, directly adjacent the Tasman Highway, the main route through the town. It is a site that the community and Council have struggled with in terms of how best to design and develop the space in a way that benefits the community economically and socially. It has been perceived as ‘dead space’ on a site that should be a visitor hub for Bicheno. The site offers an ideal opportunity to create a multiple use landscaped area that encourages visitors to stop, take a break and explore the town and in particular visit the local businesses, Visitor Information Centre and retail outlets, which surround this area.

The 2018-19 financial year saw the completion of Stage 1 of the two stage project with Civilscape being the successful tenderer.

Stage 1 involved the redevelopment of the car park area, through road, bus shelter and exposed aggregate footpaths. Landscaping was established to compliment the civil works.

Part of the original plan was to underground the existing overhead power lines but due to shallow granite in the area this had to be abandoned due to cost. 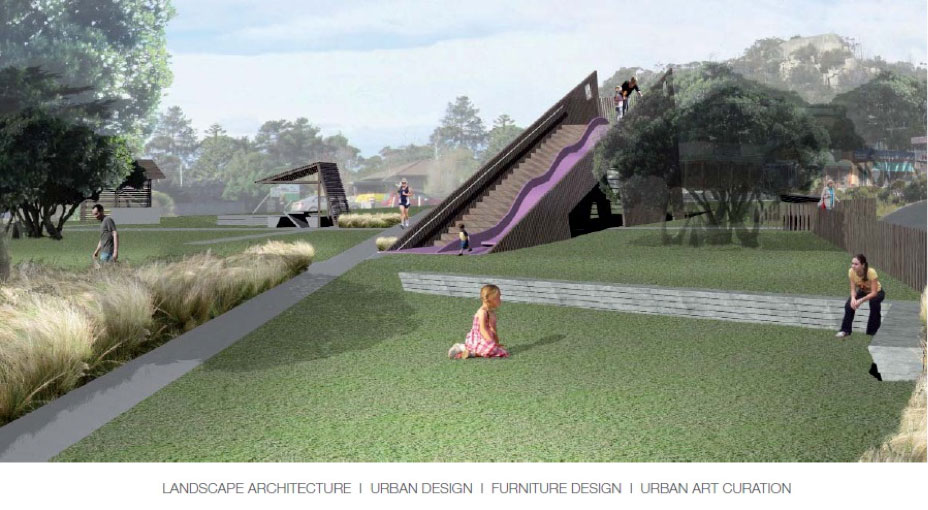 Plans are well underway for the development of a walking track along the Coles Bay foreshore from Muirs Beach to Richardsons Beach. This project is a partnership between the Freycinet Association Inc. (FAI), Parks and Council. As locals and visitors to the village of Coles Bay will be aware, the roadside along the foreshore is very narrow. This new walking track will allow safe pedestrian movement through an idyllic coastal setting, encouraging visitors to park their vehicles and enjoy the walk. The track will be constructed as an all-weather gravel pavement with footbridges where required.

Marina Views represents a development opportunity for Council owned land in Triabunna.  This elevated land is within the serviced area of Triabunna and enjoys suburb views on the township and marina.

The land currently consists of 22 lots, whilst Council has an approval from the Tasmanian Planning Commission to subdivide a further 6 lots.

Council current pays $2939.08 per annum in land tax on the 22 lots.  Upon completion of the development, this cost will be forgone and annual rate revenue of approximately $28,000.00 will be received.  There may be opportunity for additional revenue through the house & land packages, however the main incentive to Council will always be the additional rate revenue.

At its February 2016 meeting, the Council resolved to sell the land and noted the potential to include restrictive covenants as a way to guide the future standard of construction on these lots.

Council advertised expressions of interest in the project, most recently on 29 September 2018, targeting house and land packages from experienced building contractors and developments.  Interested parties were asked to respond on:

Subject to any specific proposal presented, Council could provide:

Council has not yet considered any of the responses to the expression of interest process.  Should Council expenditure be required the Council will need to consent to that as such expenditure was not part of the February 2016 resolution.

The Triabunna Town Entry – Gateway Gatehouse project was developed as part of Triabunna Tomorrow- an urban design study of the town of Triabunna. It was conducted as a collaboration between Monash University Art Design and Architecture, UTAS, Glamorgan Spring Bay Council and Spring Bay Mill.

Triabunna Tomorrow is about rethinking and redefining the town’s built environment to assist with developing the town as the gateway to Maria Island and the economic benefits of encouraging visitors to stop and spend some time exploring and discovering Triabunna.

The Gateway Gatehouse project is one of the critical Stage 1 projects to come out of a series of urban design recommendations that deliver the establishment of a coordinated culture and environment within Triabunna. It contains contemporary buildings, spaces and artworks that  completely redefine the town.

The Gateway Gatehouse has been built on Council owned land at the main entrance to the town on the Great Eastern Drive (GED) and is clearly visible from the highway. It aims to capitalise on and improve the visitor journey along the GED.

The overall purpose of the Gateway Gatehouse is to create a welcoming, memorable and meaningful entry experience to the town. It acts as a satellite visitor information centre, providing a place for visitors to pull over, discover what the town is about and clearly position and signpost Triabunna as the gateway to Maria Island National Park.

The PPRWS is progressing in accordance with the following resolution of the Council.

The motion was put and carried